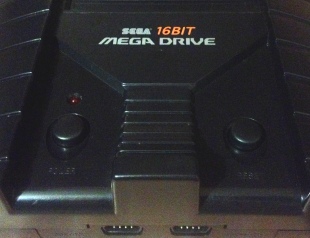 The Sega Mega Drive – one console, a thousand variants. During the 90s, amongst a host of hardware releases, the combined forces of Sega’s worldwide divisions brought us a vivid spectrum of gaming machines – the Sega Genesis, the Multi Mega, the CD-X, the Mega Jet, the Tera Drive, the Wondermega and the Nomad. From Europe, to the US, Japan and beyond, the list of licensed Sega upgrades and alternatives went on… and on. Yet, during that time, and far beyond the console war battlefield, an Asian tiger prowled its own territory. This was a land where the Sega name was all but a whisper – a video game market operating in a seemingly alternate reality, in which Samsung and Hitachi ruled the console roost, and where Sonic the Hedgehog called the mysterious Super Gam*Boy and Super Aladdin Boy consoles his home. This was South Korea – a country that also concealed one of the 16-bit era’s most obscure gems: the Sega ‘New Mega Drive’.

It was during a spot of online ‘retro’ research that I stumbled upon a website that detailed a system I had never seen, nor heard of before. “Very little is known about this product,” the website read. “It is assumed that it was released into the South Korean market quite late and was less successful than previous models. It is currently unknown who is responsible for this console or whether it had official backing.” Of course, I was intrigued – even more so when I saw the image that accompanied the text. Could it be? Was this really a Sega Mega Drive?

Needless to say, I was hungry for more. A swift Google search followed, but ended as soon as it had began. The Internet could offer literally no solid information about this mysterious console. However, through a spot of cunning detective work, I was fortunate enough to become acquainted with Igor Shaburov – a Russian Sega collector and owner of one of these illusive consoles. Thanks to his generous input and valuable image contributions, MegaBites can now unravel (at least some) of the mysteries behind this Korean console conundrum.

A little bit of background

Believe it or not, Sega’s history in Korea can be traced back to the events of 1910. It was at that time – and following a decades-long conflict of political and territorial interests – that the Emperor of Korea, Sunjong, conceded his territory to the Japanese Emperor Meiji. During Japan’s iron-fist rule, Korea’s cultural, industrial and religious systems were controversially shaped into an entirely new mould. By the time of the Second World War, and against the Korean military’s will, the country’s soldiers were thrust into the Japanese front-line. Those able to avoid military call-up were forced to labour in Japanese heavy industry.

Upon the war’s culmination in 1945, Korea’s colonial occupation came to an end. Despite its liberation, the nation found it impossible to forget the injustice it had served under Japanese rule. In one in a number of strategies to abolish further Japanese influence, the newly formed South Korea soon came to ban the sale of all Japanese products within its country.

Fast forward to the early 1990s and Japan was embroiled in a conflict on an entirely different plain – a bitter fight between Sega and Nintendo, Sonic and Mario. This was the console wars – a battle in which South Korea sought to remain as far removed from its previous occupier as possible. Despite the console industry being led by Japanese technology and innovation, the South Korean public found it hard to ignore this new and vibrant consumer sector. Clearly, a compromise had to be found.

The only feasible way for Sega and Nintendo to market its products within South Korea was by licensing its consoles to two of the country’s most reputable manufacturers – Samsung and Hitachi. In place of the Sega Mega Drive, the country had the Samsung Super*Gam Boy and Super Aladdin Boy. In the absence of Nintendo, the South Korean public got their Mario fix on the Hyundai Comboy (NES) and Hyundai Super Comboy (SNES). This Samsung/Sega trend continued throughout the 90s, with the release of Samsung Handy Gam*Boy (Game Gear), CD Aladdin Boy (Mega/Sega CD), the Super Aladdin Boy II (Mega Drive/Genesis II), the Super 32X and the Samsung Saturn. 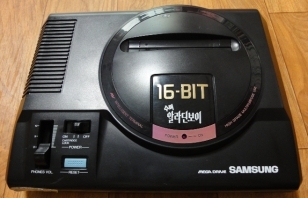 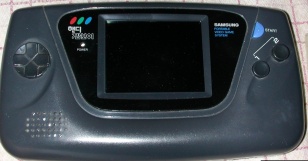 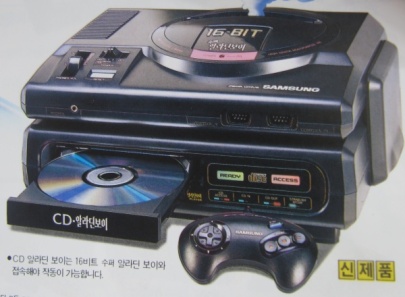 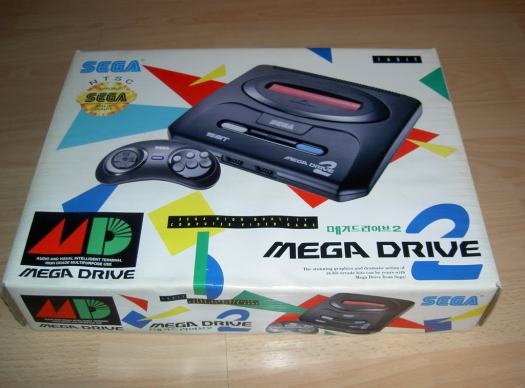 Sega’s first officially licensed South Korean console arrived in 1997 – the Sega Mega Drive II. Although its release came many years after its European/US counterpart, it coincided with South Korea’s widespread acceptance of Japanese consumer electronic products. It was also during that period that a mysterious South Korean Mega Drive variant made its debut…

Manufactured by Seoul-based electronics manufacturer Nasun Zzangpo (aka Nasun Electronic Co. Ltd) the design of the ‘New Mega Drive’ is indeed unique and is one that has not been seen outside South Korea. Displaying an ‘Optimus Prime-like’ aesthetic, the console is accompanied by a six-button control pad and connectivity in the form of RF and A/V outputs.

“I was lucky enough to buy this ‘New Mega Drive’ in South Korea from another collector,” Igor tells me. “In my opinion it’s perhaps one of the last few instances of such a console and I’d even also go as far as to say that it is officially licensed by Sega.”

However, much like myself, Igor was still perplexed about the truth behind this gaming enigma. So, armed with fresh insight and a zip-file filled to the brim with images of the console, I set about compiling as much information as possible on this Sega obscurity.

Thinking outside of the box 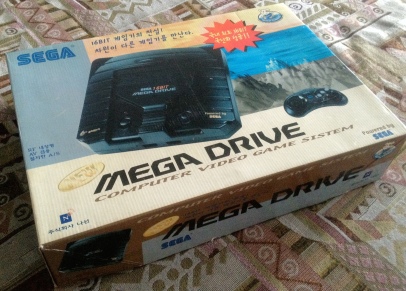 As you can see, the ‘New Mega Drive’s’ box contains a number of instances of the Sega logo. An interesting touch is the text displayed at the bottom-right of the box that reads: ‘Powered by Sega’. Furthermore, the logo on the upper-right of the box contains an image of Nasun Zzangpo’s mascot – an intriguing canine character in a blue t-shirt, giving a thumbs up while it bounces what seems to be a tennis ball. Interesting.

Of further note is another logo printed on the bottom-left of the box. At first, it appears not too dissimilar to the late-90’s Netscape logo. However, upon closer examination, it reveals a composition of the letters ‘N’ and ‘S’. Perhaps this is in some way related to the Nasun Zzangpo company? The eagle-eyed amongst you will also notice the use of the Japanese ‘Mega Drive’ typeset.

However, even before opening the box, the seeds of ‘licensing’ doubt are immediately sewn:

Notice the design of the Sega ‘A’, as displayed on the ‘New Mega Drive’s’ box (right).

And the noticeable typo:

With no solid proof either way, it is highly debatable whether or not the ‘New Mega Drive’ is officially licensed by Sega. However, this certainly doesn’t detract from the fact that the box’s contents is nothing short of a treasure chest… 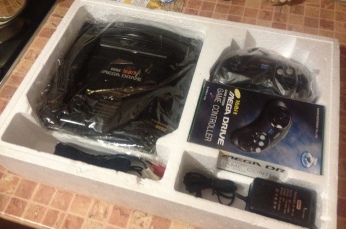 Let’s take a closer look at the instruction manual: 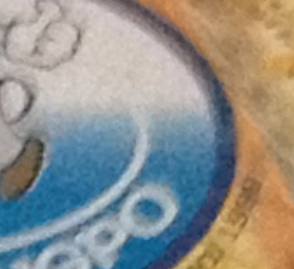 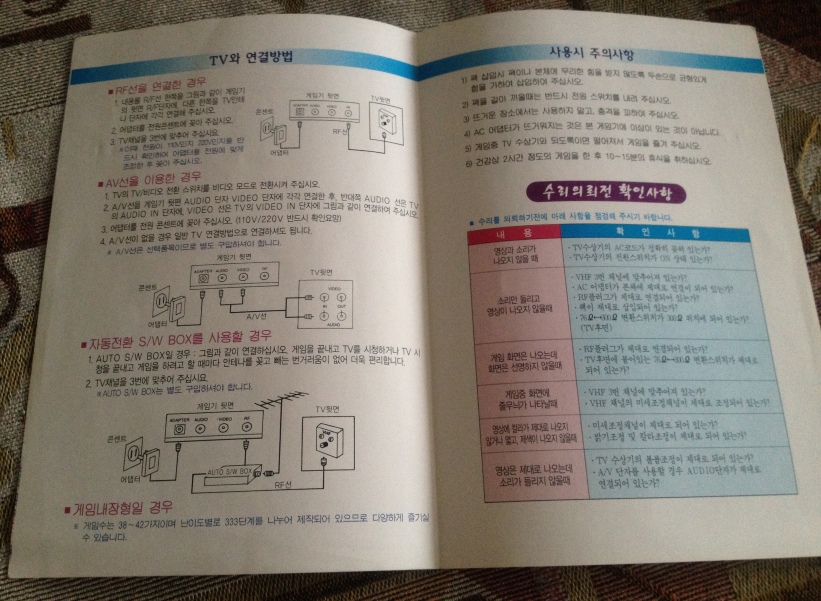 As you can see, the front cover marks another appearance of the Nasun Zzangpo mascot. Not much to see here, you may think. However, an extreme close-up of the area below the canine character reveals faint text that displays the year 1998. Year of production sorted!

Amongst the pages inside the manual are several diagrams that confirm the various methods of connecting the console to a TV set (A/V and RF).

The rear of the manual is of particular interest. A list of telephone numbers displays area codes for the following South Korean cities: Seoul, Busan, Incheon, Gwangju, Daejon, Ulsan, Daegu and Jeji-du. Short of developing any Korean language skills, unfortunately, this is where the instruction manual revelations end. For now… 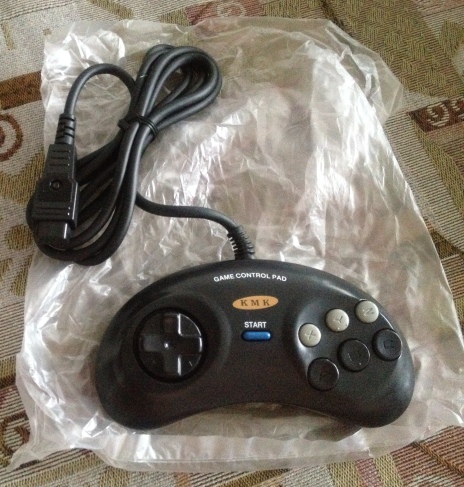 Feast your eyes upon that game controller box! Whereas the outer packaging illustrates a circa-1993 Sega-branded Japanese-configured pad, its contents reveals an altogether different accessory aesthetic. In place of the ‘Sega’ wording, the ‘New Mega Drive’s’ control pad displays a golden oval-shaped logo in with the letters ‘KMK’ at its centre. Moulded from a single piece of plastic, with a complete matte finish, the Nasun Zzangpo pad inherits nothing of the finesse of its Japanese counterpart. Nonetheless, the box is of a truly inspired design.

Here’s the big one. Let’s take a closer look at the console itself: 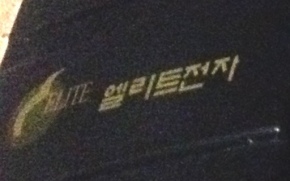 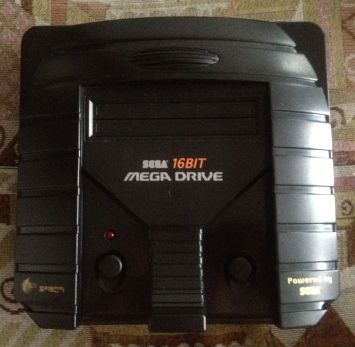 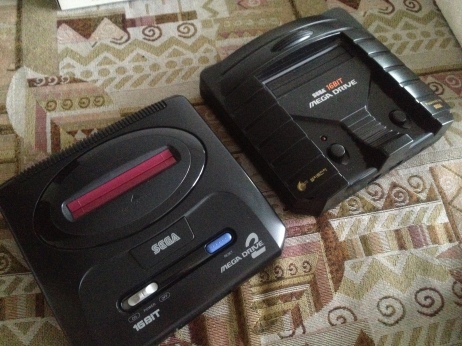 In terms of dimension, the ‘New Mega Drive’ is roughly the same size as the Mega Drive/Genesis II (22cm x 20cm). “Unfortunately, the build quality feels quite cheap,” Igor explains. “In this regard, if I were to give the console a mark out of five, I’d score it a three.” Further hindering the true origin of this console is the fact that its serial number has been removed from its base. No ‘Licensed by Sega Enterprises’ stickers to see here!

Aside from the grey and orange lettering that spell out the words ‘Sega 16bit Mega Drive’, the console’s lid is host to a further number of interesting details. On the bottom right, ‘Powered by Sega’ is written in gold text. The opposite side displays a Korean typeset and a logo containing the word ‘Elite’ – whether this is a reference to the manufacturer, or a particular technology contained within the console remains a complete mystery. 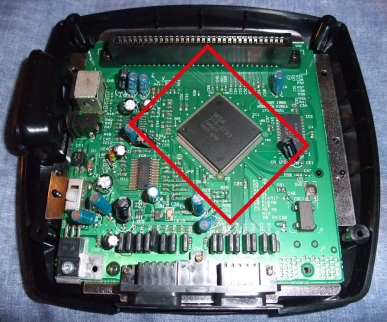 Now, here’s an interesting point, although the Genesis 3 was sold under license by US video game publisher Majesco, the console’s motherboard was manufactured in Korea. Could it be that it was made by Nasun Zzangpo Electronic Co.? It’s certainly a long-shot, but could the ‘New Mega Drive’ be Korea’s licensed equivalent of the Genesis 3? The console’s incorporation of an A/V output certainly lends to this concept.

You will also notice that the ‘New Mega Drive’s’ ASIC chip has ‘Sega’ printed upon its surface. Rather than affirm the console’s licensing, in equal measure it also distances the console from this potential status. ‘Why?’ You may ask. Well…

In 2001, Russian manufacturer Newgame released a clone of the Mega Drive II, which it fetchingly named the Magistr Drive. Manufactured by Gao Di Electronic Ltd, several sequels followed, with the console’s packaging soon coming to incorporate the Sega logo. Later models also bore an uncanny resemblance to the Genesis 3. Despite the aesthetic changes, one constant remained – each instance of the Magistr Drive contained a Sega-branded 315-6123 ASIC chip. Clone, or no clone, the incorporation of such a component counts for little when identifying the legitimacy of a Mega Drive/Genesis console. A quick glance at the Magistr Drive’s interior and you begin to see my point. Ouch!

The end of the trail?

Sega’s arrival in South Korea was made complete in 2003, upon the establishment of Sega Publishing Korea (SPK). Headquartered in Seoul, the division was guided by Sega of Japan to handle the loacalisation of games for consoles, PC and mobile phones. Today, SPK functions as an independent vendor and also operates a number of cinemas in the country.

And so, the question remains; the ‘New Mega Drive’ – licensed, or cloned? In my opinion, and based on the evidence outlined in this post, I’m inclined towards the latter – but I’d love to be proved wrong.

(Do you have any further information on the ‘New Sega Mega Drive’? Can you translate the Korean text in this post? If so, drop MegaBites a line on the ‘contacts’ page, or contact me on Twitter – @MegaBitesBlog)

Huge thanks go out to Igor Shaburov for all his valuable input and imagery.