The Mega Drive Mini is Sega’s first official in-house console launch since 2001. Bringing the Sega Mega Drive back to the masses in miniature format, the release has also resurrected a cult hardware combo — the awe-inspiring ‘tower of power’. Read on as MegaBites dives in for a close-up aesthetic comparison of the 2019 ‘tower’ and its mid-90s original.

Name a famous tower — the Eiffel Tower, the tower of London, the leaning tower of Pisa perhaps? Ask the same question to a retrogamer and the answer is likely to be Sega’s ‘tower of power’.

While the Mega CD had been available since 1991, the tower was only made possible following the release of the 32X in 1994 (Japan/USA) and 1995 (Europe). By this time, however, the Sega Saturn had already become Sega’s 32-bit showpiece, and the gaming industry at large was singing to the tune of Sony’s shiny new Playstation 1 release.

Requiring a combined investment in the range of £400 (!), young Sega fans at the time were looking at a lifetime of paid household chores to afford the ‘tower of power’ unit and its compatible titles.

With all these circumstances combined, Sega’s almighty tower was simply unrealistic and unattainable for the masses. Even today, the hardware remains an obscure anomaly to track down — until now.

Mini by name, mega by nature

Fast forward to 2019 — a miniature replica of the ‘tower of power’ has been made available as an add-on for the Mega Drive Mini.

At the time of writing, the accessory is only available to the public as a Japanese variant… at least for now. However, Sega has unleashed European and US formats of the mini tower to a select few social media influencers and members of the press.

With my own full size European ‘tower of power’ in tow, and the odd piece of Japanese hardware thrown in for good measure, how do the elements of the ‘mini’ shape up against their 90s counterparts?

Let’s begin with the obvious — the sheer difference in size between the ‘mini’ and ‘mega’ tower of power.

In terms of measurements, the full size tower of power comes in at:

On the other hand, the Mini tower of power measures:

Connecting to the Mega Drive via its cartridge port, the 32X boasted two Hitachi SH-2 CPUs and was capable of displaying an impressive 32,768 on-screen colours — a far cry from the Mega Drive’s total of 61. Quite unbelievably, the 32X was touted as being 40x more powerful than the SNES.

A console of contention between Sega of America (who favoured the 32X) and Sega of Japan (who did not), ultimately, the 32-bit add-on was overshadowed by the release of the Sega Saturn. A short lived affair, the 32X’s catalogue of 40 games does contain a few gems — Chaotix, Virtua Fighter and Kolibri included.

Although it looks the part, the Japanese mini tower of power’s Super 32X add-on is non-functional. Being purely for aesthetics, it certainly looks the part and is a near-identical copy of it’s full-size predecessor. Take a look for yourself… 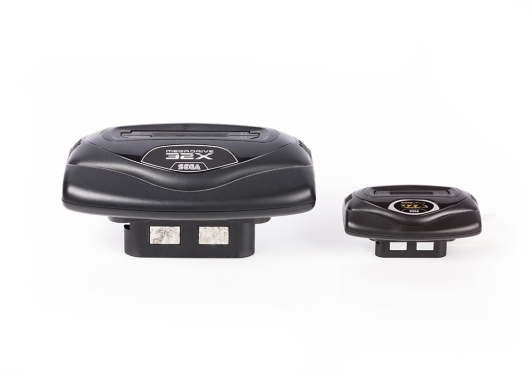 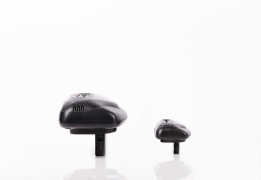 Our next port of call

Of course, at the time of release in 1988, the USB standard simply didn’t exist. The original Mega Drive housed two DB-9 male ports. Careful not to bend those pins! 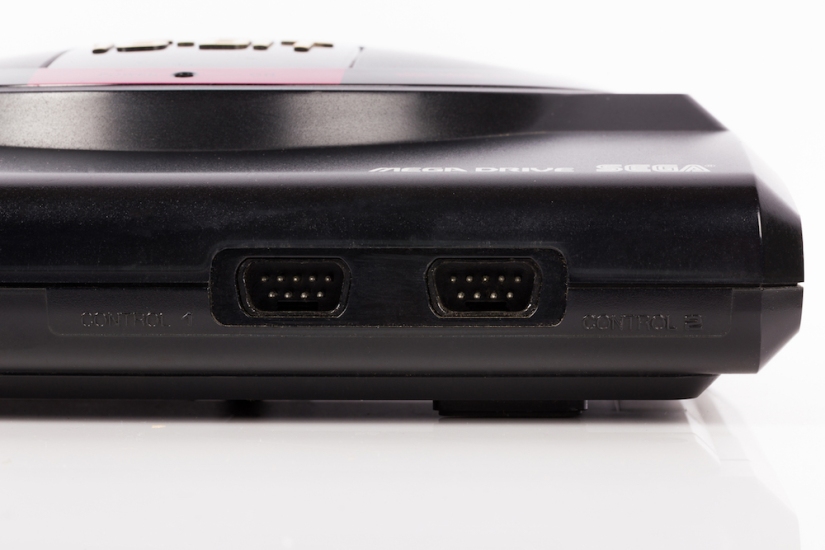 Power to the tower

The mini tower is powered by a USB-to-Micro-B power cable, with the option of connecting to a mains outlet via an optional USB AC adapter. Television connectivity to comes in the form of an HDMI video cable, included in the box.

When it comes to the mega tower of power, the sheer number of cables and adapters required for its operation needs no introduction. At the very minimum, the 90s behemoth requires…

Not forgetting the Mega Drive’s steel joining plate and screw, which connects the unit to its Mega CD base:

With all the necessary clips already built in to the ‘mini’ Mega CD, the Mega Drive Mini doesn’t require any form of plating.

A purely optional addition for owners of the full-size tower of power are a set of Mega Drive cartridge bay clips. Made of thin, flexible aluminium, the clips serve to securely hold the 32X in place when docked into the Mega Drive. It looks crude, but your cartridge dock will thank you for it! 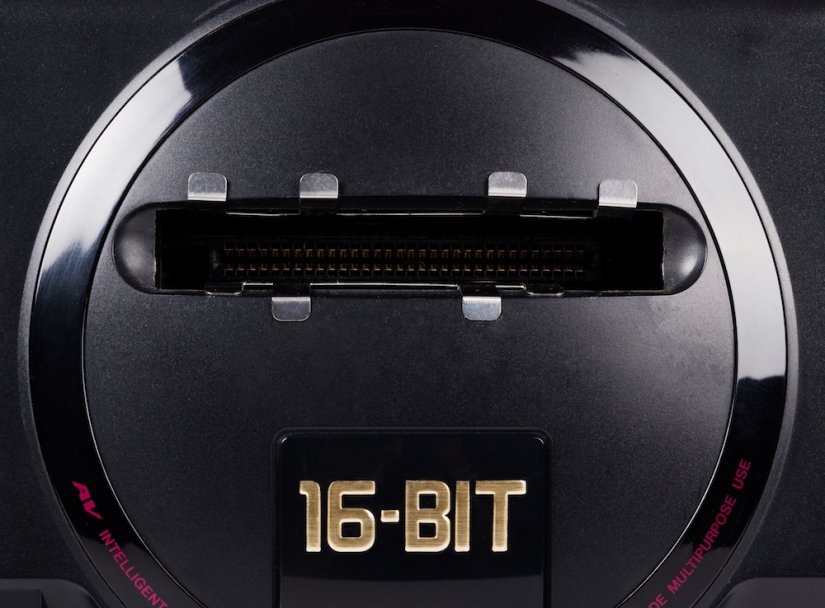 With the 32X securely fitted, the original Mega Drive interfaces with the Mega CD via a side-mounted expansion port: 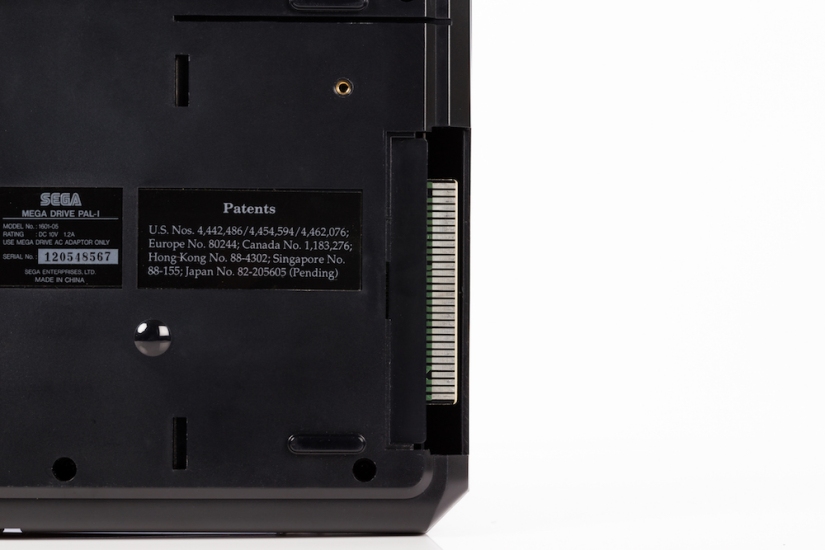 Which then connects to the Mega CD through this port:

Being purely for show, the Mega Drive Mini’s expansion port, is an entirely different story: 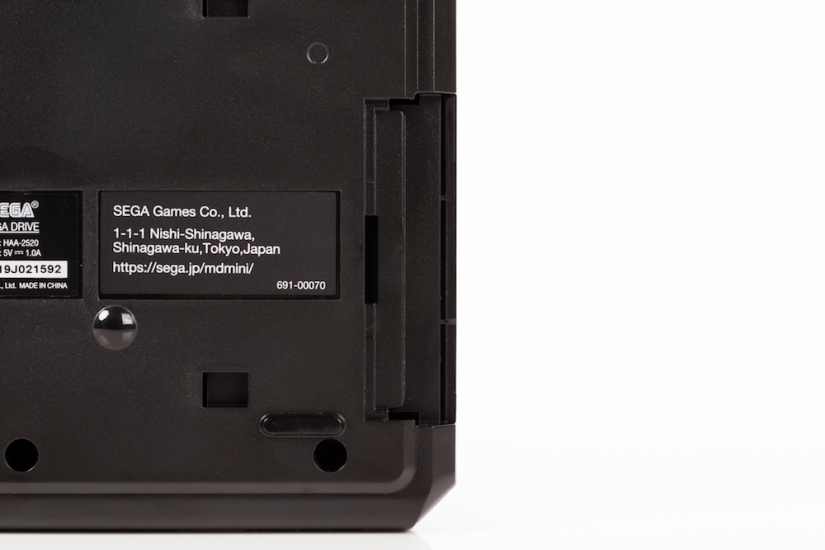 Fully docked, with cables connected and all three AC adapters plugged in, it’s fair to say the original tower of power is quite a tangle, even without the full optional audio cabling in place: 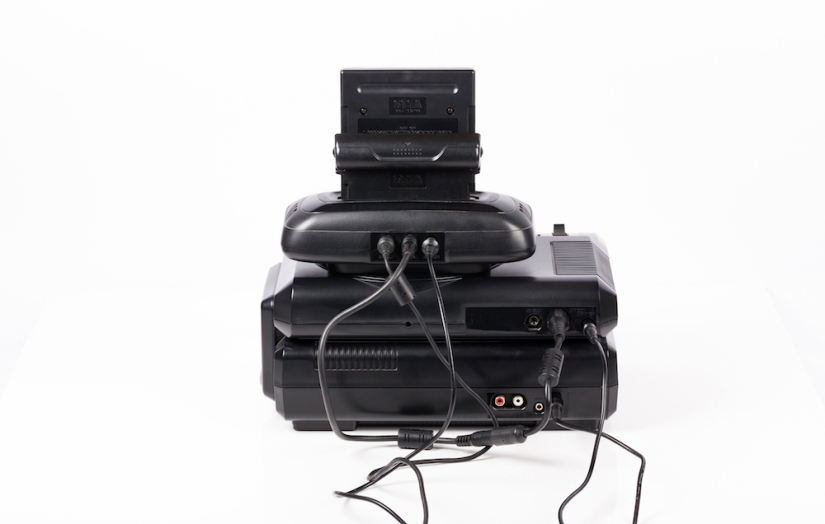 However, the mini tower of power contains a single HDMI output and USB power source. (The fact that the mini 32X and mini Mega CD are non-functional certainly helps here):

Rather interesting is the mini tower of power’s choice to bundle with two dummy cartridges — Sonic & Knuckles and Sonic the Hedgehog 1. What’s particularly intriguing here is Sega’s choice of Sonic 1.

The release of Sonic & Knuckles enabled a range of backward compatibility options for Sonic 2 and Sonic 3. Docking Sonic 2 to Sonic & Knuckles allowed the player to select Knuckles as a playable character — a rather nifty feature.

On the other hand, plugging Sonic 3 into the cart created the almighty Sonic 3 & Knuckles — an extended, superior cut of Sonic 3 and a faithful representation of Yuji Naka’s initial vision for Sonic’s third outing.

Undoubtedly, Sonic fans would  have preferred to have seen the inclusion of a Sonic 3 cart here. Although, the current legal issues surrounding Sonic 3 and the estate of a certain ‘moonwalking’ artist likely played a role here.

Let’s size these carts up… 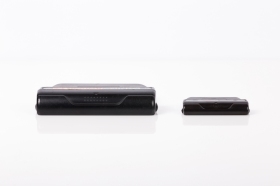 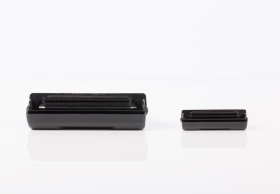 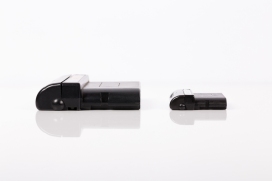 For the sake of comparison, how does the mini tower of power shape up next to the full size Sonic 1 cart and box? 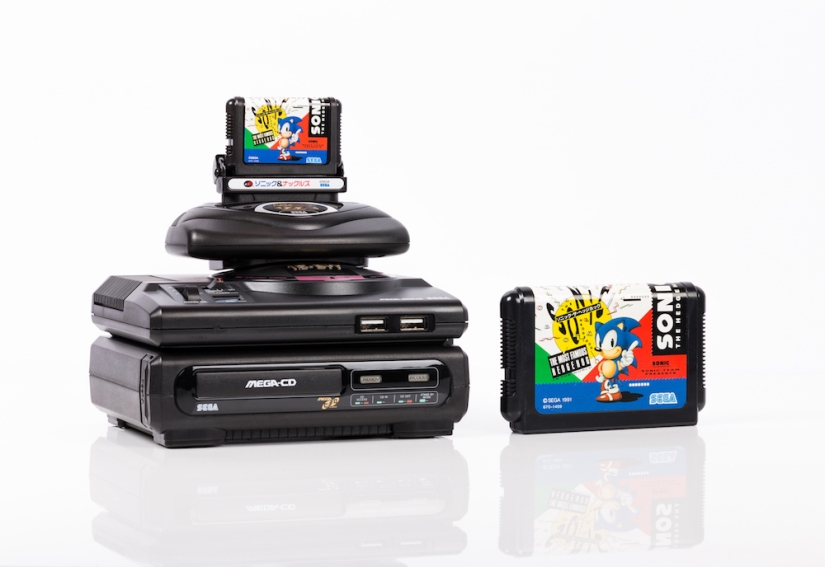 Unlike it’s European and American cousins, which include a three-button pad, the Japanese Mega Drive Mini comes bundled with a six-button pad by default. The ‘mini’ pad is pretty much identical to its 90s original model. Although, on first impression, the Mini’s pad did feel slightly smaller in the hand. 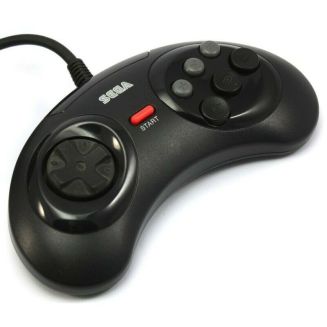 An interesting point of difference is the text at the rear of the Mega Drive Mini’s pad, which notes its manufacturer as ‘Sega Games Co, Ltd’, unlike the original pad:

The original mark-1 Mega Drive featured an audio-out jack port. Not only did this allow for private listening, it also functioned as a stereo output for gamers that wished to hook their console up to a speaker system. Upon the launch of the Mega Drive II in 1993, the ‘phones’ port would be no more.

A physical ‘phones’ port is a noticeable omission on the Mega Drive Mini. However, the unit’s HDMI output does provide stereo sound on modern TV sets.

Switches, buttons and slides, all are faithfully recreated on the mini.

While the mini’s volume control is non-functional, the ‘power on/off’ switch retains its original purpose. The mini’s ‘reset’ button, on the other hand, serves to stop gameplay and load the system’s game selection menu.

The omission of Sega’s registered trademark logo is an interesting feature on the mini:

Can you spot the difference? 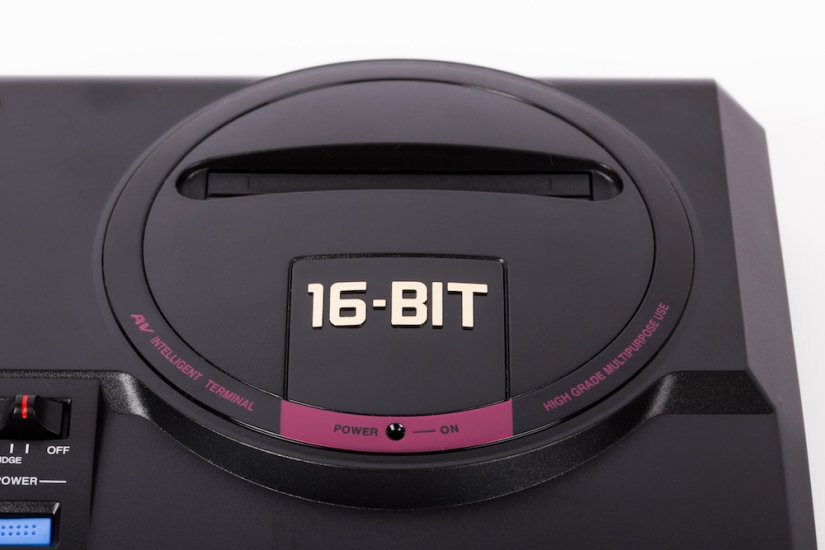 Dubbed the ‘Mega CD’ in Europe and Japan, and the ‘Sega CD’ in the US, the Mega Drive’s CD add-on sits at the foot of the tower of power.

Released in Japan in 1991, North America in 1992 and Europe in 1993, the Mega CD brought with it CD-quality audio, FMV video, ‘Mode-7-like’ graphics and a second Motorola 68000 processor (further to the processor present on the Mega Drive’s PCB). While the Mega CD was still a 16-bit unit, the system’s CD-ROM format provided over 640mb of ROM storage — 320 times more than a standard Mega Drive cart.

For all the upgrades it provided, the Mega CD received a lukewarm reception during its lifetime. The court proceedings surrounding the on-screen violence in FMV title ‘Night Trap’ certainly thrust the console into the spotlight for all the right and wrong reasons.

In the early 90s, the future may have been ‘CD’, but the Mega CD was hampered by a lack of in-house and third-party support. This, combined with the price of outlay (around £300 for the Mega CD alone!) and the threat of arguably superior CD hardware at that time (3DO and CD-i included), the Mega CD met its untimely demise.

That’s not to say that the add-on wasn’t host to some incredible titles, namely Sonic CD, Snatcher and Final Fight CD.

As mentioned, the Mega CD Mini is purely for aesthetics, but that certainly doesn’t detract from the fact that it’s a stunning piece of kit, near identical to its full-sized predecessor.

Plus, the Mega CD Mini comes with an added secret feature. Read on, where all will be revealed! 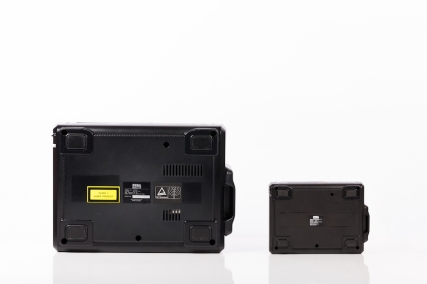 As well as its AC adaptor socket, the original Mega CD featured left and right stereo out interface and mixing socket (for pairing with the Mega Drive’s ‘phones’ port:

When it comes to the mini version, well… There isn’t really much to report: 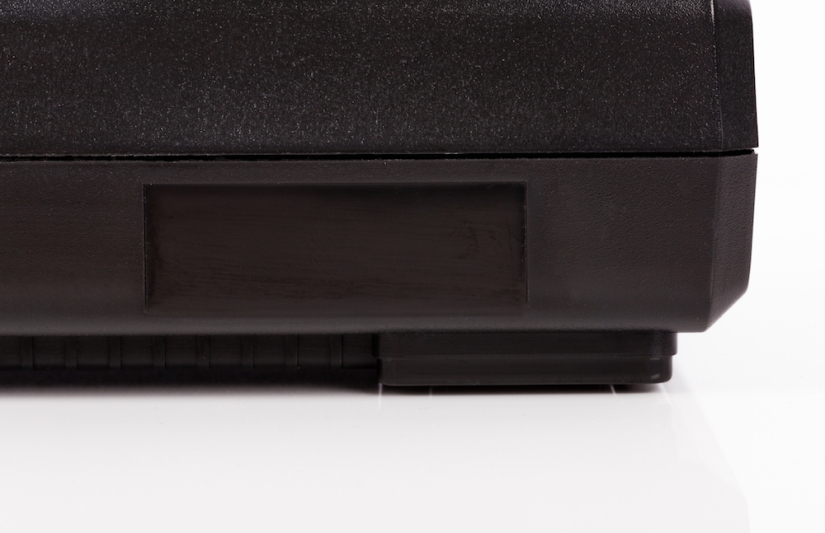 One of the Mega CD’s standout physical features is its disc status panel, lit by a series of corresponding LEDs. Although it’s non-functional, the Mega CD Mini recreates this panel in precise detail — barring the ‘compact disc’ logo, which isn’t included. 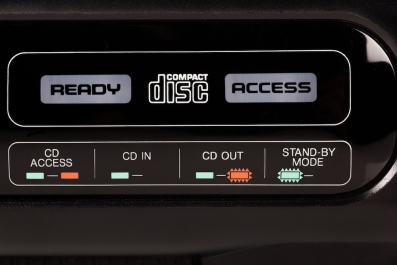 The Mega CD Mini hides a secret. Inside its outer casing is a mock-up of the console’s PCB, complete with Sonic CD disc! N.B. This being a Japanese format unit, the eagle-eyed amongst you will notice the Japanese version of Sonic CD in the Mega CD Mini’s disc drive.

Opening the US version of the Mega CD Mini reveals the US format of the game. The European version of the mini console also contains the version corresponding to its region (as seen in the image above).

So there you have it! Every last ‘mini’ square inch covered.

The Sega Mega Drive/Genesis mini is out now in all worldwide territories. 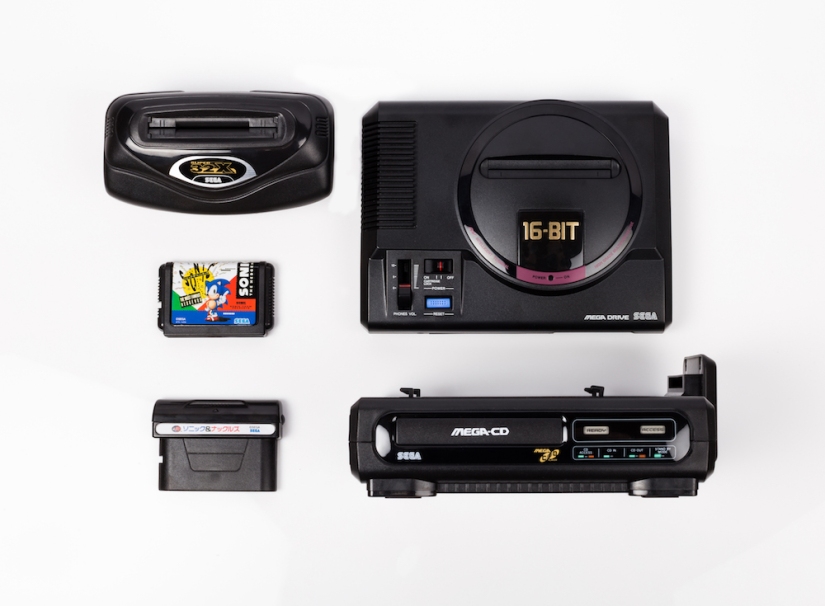 All photos by MegaBitesBlog (except European control pad imagery).